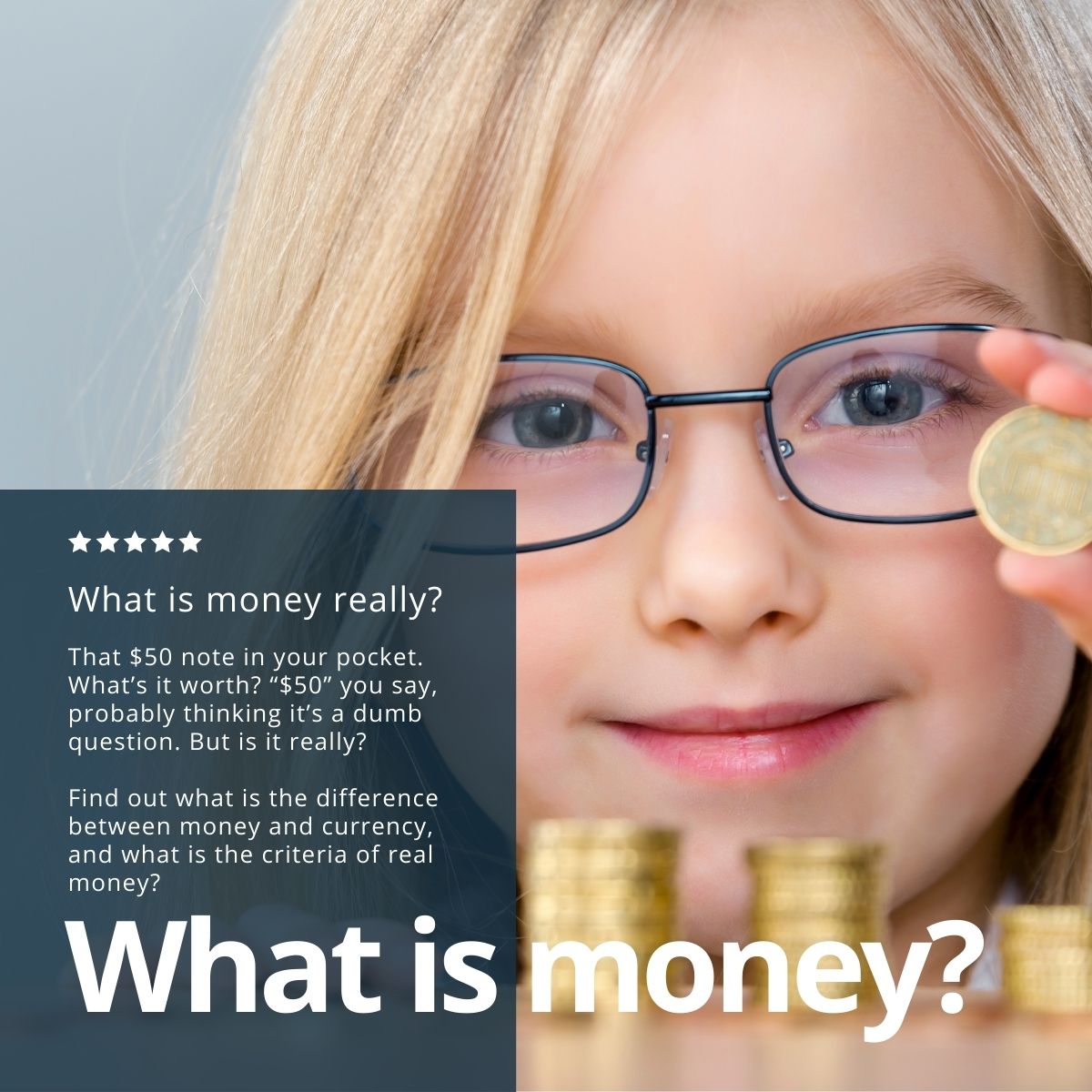 What is money really?

That $50 note in your pocket. What’s it worth? “$50,” you say, probably thinking it’s a dumb question. But is it really? Or a sheet of plastic and a bit of ink that likely cost the note printer less than a cent? Your $50 note only has value because the government declares that it does.

This lack of intrinsic value means your $50 note, and the balances of bank accounts that represent most money in circulation, might better be described as currency rather than ‘real money’. For the majority of us, most of the time this distinction is of no great importance, but there are times when it matters a great deal.

Over the past few thousand years, all sorts of items have been used as currency, from shells and cocoa beans to soap and cigarettes. But to be considered real money, several key criteria need to be met. The most important are that it is:

Throughout history, gold and silver have come closest to meeting these and other criteria, though nowadays you’ll have difficulty paying for your groceries with gold Krugerrands. Also, you’ll want to keep your gold and silver in a safe place, and it was people seeking to do just that which gave rise to paper money and our current system of bank-created money.

What started as a good idea…

Centuries ago, goldsmiths would take in gold and silver for safekeeping and issue the owners receipts, or notes, confirming the amount of gold held. The depositors soon discovered that these notes could be used for payment in place of the physical gold, making them an early form of paper currency. But the goldsmiths noticed something else. It was rare for anyone to redeem all their notes at once. They saw the opportunity to issue notes as a loan that borrowers paid back over time, with interest. And, because the redemption of the gold was relatively rare, they could create loans worth many times the value of the gold they held. Provided borrowers paid back their loans on time and only a small proportion of owners wanted their gold back at any given time, all was well, and goldsmiths transformed into bankers.

But this didn’t always work out. An economic shock might see everyone wanting their gold back, and if the bank couldn’t deliver the full amount that was demanded, it went broke. To help prevent this, many countries created central banks, with some governments even acting as lender-of-last-resort.

While government control and the rules around banking have evolved over time, private banks are still the source of most currency created today using a process that is much the same as that used by goldsmiths of old. However, gold no longer plays a part. Most countries did away with the gold standard during the 20th century.

Banks may be better regulated than they were in the past, but that doesn’t prevent crises happening from time to time. Reckless selling of mortgages to people who had no hope of repaying them, then bundling them up in complex financial instruments that multiplied debt was the cause of the sub-prime lending scandal that sparked the Global Financial Crisis.

When things get real

In economically stable times it’s easy to think of currency and real money as the same thing. However, a couple of examples reveal the difference between the two.

One is when a government starts printing money to pay for its programs. Inflation usually results, and the value of the currency can plummet. In the case of hyperinflation, paper money and bank deposits can quickly become worthless as happened in Germany in the 1920s.

And banks still go bust, as Lehman Brothers proved in 2008.

In Australia, depositors are protected by a government guarantee, but this is limited to $250,000 per person per Authorised Deposit-taking Institution (ADI).

In both situations ‘real’ money such as gold retains its intrinsic value. All else being equal, if a unit of currency halves in value due to inflation, the price of gold will double. And provided gold is stored securely, it can’t be consumed by the debts of a mismanaged bank.

The difference between currency and real money and the issue of intrinsic value has implications for other investments. If you would like to learn more, talk to your Lifespan Financial Planning authorised financial adviser.